Missed The Bus for District 9 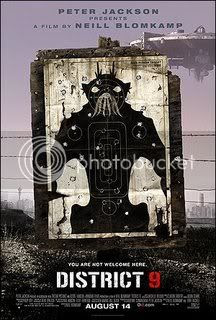 I was a few weeks behind everyone else in seeing District 9. Normally, when a friend of mine expresses a desire to see a movie, I am more than happy to oblige and accompany them to the theatre. However, when that arrangement gets delayed more than once, I usually give them a two week moratorium before I go see the movie anyway. The film was worth the wait as District 9 is easily one of the best films of the year.
District 9 lived up to the hype and completely blew me away. The documentary fashion immediately drew me into the story and I sat in rapt attention to the story of peaceful aliens who arrive on Earth, then are forced into detention centers while the governments of the world putter about and are unable to effectively deal with the problems posed by the influx of an alien population. I was horrified as the MNU agents laughed at killing the alien eggs while making abortion jokes and threatened the aliens with physical separation of their families. For all the obvious references to South Africa and apartheid, I could not but help to think of Germany and Kristallnacht. For here were living, breathing beings who are forced from their homes and killed if they resist, all because they are different from us. That's how terrific the storytelling was, it made me think of one of the darkest periods in our world history. 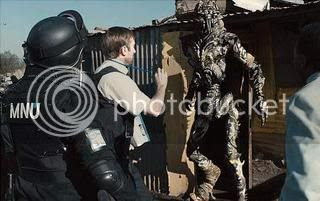 I had hoped for more of a determined resolve from the main character Wikus to stop the cycle of hate and ignorance in his metamorphosis into one of the creatures. While he does cut short his escape to defend them and help them get back to their ship, his own motives are purely selfish and even near the very end, he seems to act out of desperation and helplessness rather than a genuine empathy with the aliens. I think that was really the message of the film and I like that they didn't hammer it home, leaving the audience to root for Wikus and hoping he would help Christopher and his son get home.
Or at least return for the sequel. 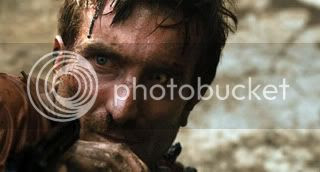 The movie's narrative structure strongly reminded me of Jaws, insomuch as the story seems so grounded in reality that by time shit gets really crazy at the end, you don't even question, you just go along for the ride. Great, great movie.
Written by Big Mike Mendez at 8:00 AM

This is one of my favorites of the year as well. I really liked it. I've been trying to write about it for a month but I've been having major writers block. Three blogs I've started and haven't been able to finish. That's the way it goes though. Great review.

Totally agree that this movie is about five kinds of awesome, and proves that you can make a genre and still give it something to say.

As for waiting for people to come to a movie with me, you're more forgiving than me...I give 'em days, not weeks.

Hmmm. Still have to see this. I passed up the opportunity thrice...

On a different note...I just go see the movie and lie and say I didn't:D

Big Mike Mendez
Michael J. Mendez is a writer, director and producer. His influences include Andre Bazin, Kenneth Turan, Peter Bogdanovich and the classic critic team of Statler and Waldorf. He has attended film school, worked in film and television production, is an avid collector of DVDs and attends the filmed cinema as much as possible, weekly, bi-weekly, inter-weekly. Michael is a Cancer and enjoys golf.

Enlist in the League of LAMBs.

Want the code? Email the LAMB.
Like the LAMB? Join!